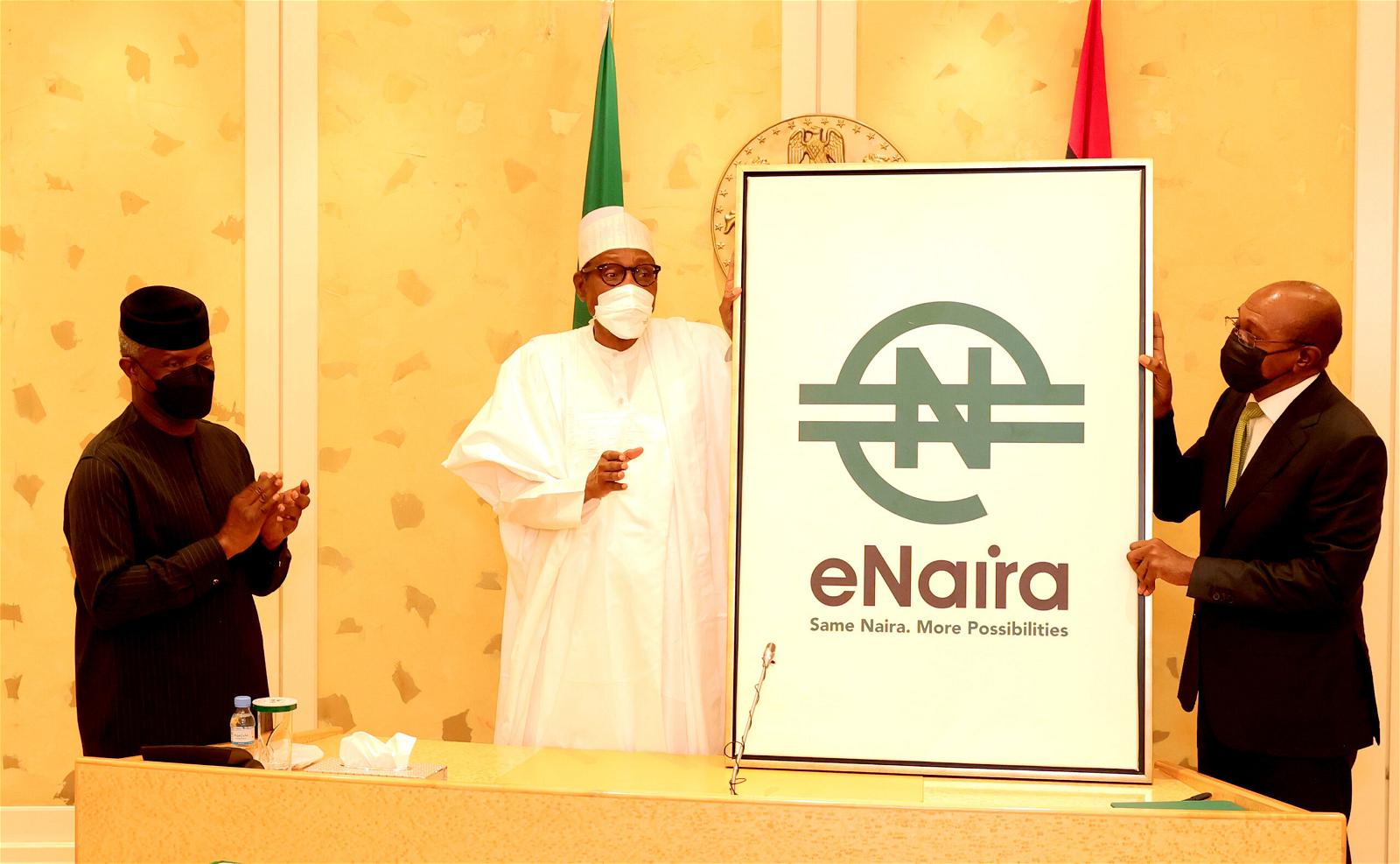 …33 banks fully integrated and live on the platform — CBN

President Muhammadu Buhari yesterday launched the Central Bank of Nigeria’s digital currency, the e-Naira, saying that the currency and its underlying blockchain can increase Nigeria’s Gross Domestic Product, GDP, by $29 billion in 10 years.

This is even as Governor of the Central Bank of Nigeria, CBN, Mr. Godwin Emefiele, disclosed that since the eNaira platform went live, there had been overwhelming interest and encouraging response from Nigerians and other parties across the world, with over 2.57 million daily visits to the website.

The President also declared that introduction of the e-Naira will enable the government to send direct payments to citizens eligible for specific welfare programmes as well as foster cross-border trade.

While unveiling the eNaira  in Abuja, Buhari said Nigeria’s digital currency will help move people and businesses from the informal into the formal sector, thereby increasing the tax base of the country.

He said eNaira will cater for businesses and households seeking faster and cheaper means of payment instead of “private currencies” that had gained popularity and acceptance across the world, including Nigeria.

Buhari said:  “In recent times the use of physical cash in conducting business and making payments has been on the decline. This trend has been exacerbated by the onset of the COVID-19 pandemic and the resurgence of a new digital economy.

“Alongside these developments, businesses, households, and other economic agents have sought new means of making payments in the new circumstances.

“The absence of a swift and effective solution to these requirements, as well as fears that the Central Banks’ actions sometimes lead to hyper-inflation created the space for non-government entities to establish new forms of “private currencies” that seemed to have gained popularity and acceptance across the world, including here in Nigeria.

“In response to these developments, an overwhelming majority of central banks across the world have started to consider issuing digital currencies in order to cater for businesses and households seeking faster, safer, easier and cheaper means of payments.”

“Alongside digital innovations, Central Bank Digital Currency, CBDC, can foster economic growth through better economic activities. Indeed, some estimates indicate that the adoption of CBDC and its underlying technology, called blockchain, can increase Nigeria’s GDP by US$29 billion over the next 10 years.

“It is on this basis that I am delighted to officially launch the Central Bank of Nigeria Digital Currency, called the eNaira, and in so doing, we have become the first country in Africa and one of the first in the world to introduce a Digital Currency to her citizens.”

Speaking on the e-Naira, Emefiele disclosed that since the eNaira platform went live, there had been overwhelming interest and encouraging response from Nigerians and other parties across the world with over 2.57 million daily visits to the website.

He said 33 banks were fully integrated and are live on the platform, adding that N500 million had been successfully minted by the bank, with N200 million issued to financial institutions, while over 2,000 customers were already on board.

The CBN boss said: “Over 120 merchants have successfully registered on the eNaira platform and with the launch, customers who download the eNaira Speed Wallet App will be able to perform the following: onboard and create their wallet; fund their eNaira wallet from their bank accounts; transfer eNaira from their wallet to another wallet; and make payment for purchases at registered merchant locations.”

“eNaira Speed Wallets: eNaira speed wallets shall be available for end-users to transact on the eNaira platform.

“Security and Privacy:  The two-factor authentication and other measures shall be adopted to ensure the security of eNaira wallet.

“NOTE: For a successful self-service enrolment on the eNaira Speed App, the mandatory requirements for some BVN details must match similar details attached to the consumer’s profile at the BVN database.

Consequently, there is need for consumers to familiarize themselves with details of their BVN profile to identify and rectify gaps or stale information (especially email address) through their banks. The relevant information for a successful BVN validation check are: First Name; Last Name; Date of Birth (DD/MM/YYYY);  State of Origin; Email; and  Phone Number.”

No one can operate 2 wallets

As the Central Bank of Nigeria (CBN) unveils the e-Naira, it has emerged that no one would be allowed to own more than one wallet.

Mr. Adeolu Fadele, a staff of the Information Technology Department of the bank revealed this while fielding questions at the bank’s workshop for finance correspondents and business editors, in Enugu, recently.

Mr. Fadele also said that the e-Naira will only be a digital equivalent of cash in one’s pocket and would not earn any interest.

According to him, “it is not interest-bearing because it is not cash in the bank; it is cash in your pocket.”

Fadele admitted that the risks inherent in the digital currency, adding that the CBN is taking cautious steps and doing everything necessary to ensure its integrity is not compromised by hackers or other criminals.

He urged members of the public to also ensure that they do not fall victim to unscrupulous individuals through negligence when the currency became operational.

How to open e-Naira wallet

lWhere to start is to download the e-Naira app from google store place or apple.

lNote that after requesting the app, you may be asked to verify your identity by entering your passcode or by using Touch ID or Face ID.

lTo install apps, you must sign in with your Apple ID or create one.

lWhen the app appears, tap the app. Tap GET, then tap INSTALL.

lClick on “Signup” to commence the on-boarding process.

lEnter the following: First name, Surname, Date of birth, State of Origin, Account number tied to your Bank, and BVN.

lOn successful validation, of the above details, a wallet activation mail is sent to the email address tied to your BVN.

lGo to registered mailbox and confirm receipt of email.

lClick on “Active Wallet” to confirm your email and activate your speed e-Naira Wallet.

lEnter your surname and password to login to the e-Naira Speed Wallet.

lTo Fund the e-Naira Wallet, log in to your bank Moblie/Internet Banking platform and initiate the transfer to your wallet and your wallet will be credited with the amount requested from your account to your wallet.